That night, my spine met a mattress for the first time in fourteen days. Maybe my back felt better but my spirit was a little deflated. Ben was asleep most of the journey and fell asleep again almost immediately on our arrival in Preston. Me and Yuri talked late into the night. I guess the two of us hadn’t really had a conversation since the start of the journey. You’re in such close proximity at all times there’s a tendency when not all discussing things together to just be quiet and take some time. Neither of us were happy to be heading home. After a while, he went to bed and I finished the Pearl and wrote a little.

In the morning, the adventure was over. Back in England. Later that day I’d see the local shopping centre, that ugly spaceship of a building, and I’d know I was truly home and not just home but returned to my life. One of the few things that can be yours regardless of whether you want it. Still, on the way back, and it’s almost a beautiful metaphor for the trip, we explored another abandoned castle. This castle though, was part of a derelict theme park. 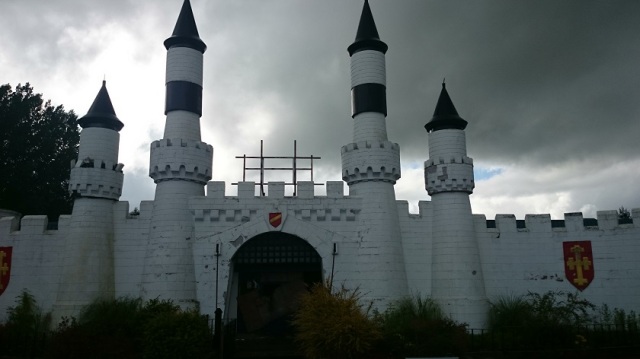 On the way into the Highlands, we felt the real; walked through a Victorian castle whose floorboards were gnawed by bugs and whose wallpaper was curled and stained from leaks, where we could feel the cold expressed from the stones that made up the staircase walls. On the way home, we walked through disused turnstiles, crossed a short bridge over a shallow, mostly dried up moat and entered a plywood and plaster castle, painted white and greyish blue like fresh stone. The walls of this castle were rotten and soft and flaking in places and this was only partially disguised by the paint and spots of graffiti. We entered into a courtyard that still had queuing etiquette signs on stands and was littered with coloured plastic balls.

It was a big place; boarded up rooms and attractions and half forgotten buildings everywhere. If you were a local kid you could make a lifetime of memories in this place. Inside the walls of the castle were several other structures and marquees, most of them accessible one way or another. There were medieval style buildings with fake thatched roofs that would have been games stalls or vendors once. They stood incongruously next to modern overhead notices that read Food Court or Toilets. The whole place is evidently one big, failed money making endeavour. So unprofitable it was left to decay.

We climbed into one building via a smashed window, using a wooden handrail for support. It was weak with age and moisture and using it was a dodgy business.  Once you clambered through you came into a fairly large open area with benches and stalls around the edges where people would have got food and drink and probably entry tickets. On the other side of a partition were the remains of a partially de-constructed multi-level kids play area. We went inside immediately. This was a good find. There were still parts to climb and an old enclosed rope bridge across the second level. There were holes in the floor and large spaces in the walls on the upper story where funnel slides used to be. Everything was designed with the medieval theme in mind, at least vaguely, using the same painted stone walls as most the rest of the place. 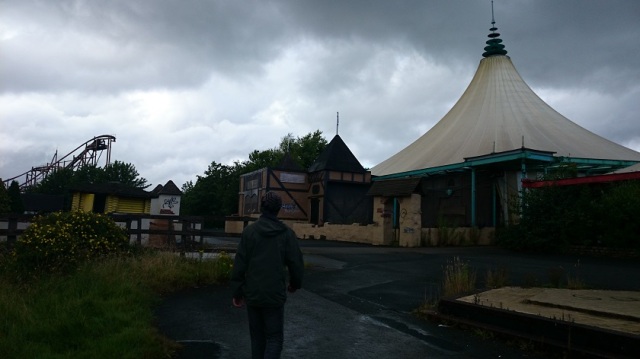 After getting out of there we wandered a few of the faux-olde streets, keeping the rusted loops and arches at the back of the park in sight. There wasn’t too much in the surrounding buildings; a few carnival mirrors, a yard with a couple of old rollarcoaster cars sat in an old shed, mannequins sad side by side in the seats as if anticipating a ride. There were a lot of raised wood platforms and walkways which had been eaten away and were very brittle. On the surface, even up close, they looked find but the beams were severely compromised and required caution and avoidance in some place. 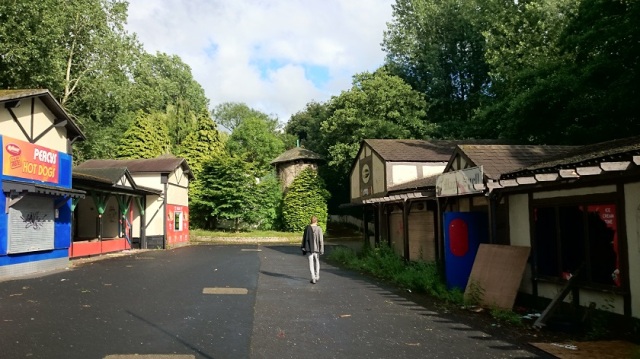 At one point, still following the horizon for the orange-tracked, abandoned rollercoaster, Ben stopped. ‘There’s a car,’ he said.

‘What?’ But a few steps later and I saw what he was talking about. It was parked in a secluded corner that you had to pass to get to the rusted ride.

There were a few possibilities here, one was that nothing would happen and no one would be in it. Running was still an option. A moment later a small man in a suit got out the car and demanded to know what we were doing on the site.

‘Just looking around,’ I said.

‘Come on,’ said Ben, irritated by the guy’s hostile approach and expression. ‘We’re not doing any harm. We haven’t broken in. We just walked in. What’s the problem?’

The man looked slightly taken aback. He searched his memory but found nothing decisive in response.

‘It’s abandoned,’ said Yuri. ‘Look at it,’ his tone a little less calming than ours. Rather than talk to the security guard further he ignored him and walked on while me and Ben negotiated. That was fine. His reaction was perfectly reasonable. Why should he trouble himself over an aggravated man that harasses him simply for walking?

‘We were just looking around,’ I repeated. ‘It’s an interesting looking place, isn’t it? You must admit.’

He didn’t. He tutted.

The man’s manner changed slightly, he seemed smaller; the power dynamic was shifting, he was on the back foot and had started to feel a little self conscious for approaching the situation like an asshole. This was probably made all the worse as it became clear that a polite conversation would have done fine, that his brief adrenaline rush was misplaced and that he had very little to assert himself with once the initial barrage of stern facing and security guard swagger had failed.

‘We’re not doing anybody any harm. We’re just walking around. We’ll be gone soon, no harm. Why don’t you let us wander around for another five minutes then we’ll be off.’

He permitted the five minutes but asked us not to exceed it or else he’d be punished. We thanked him and then walked around the rusted coils, the rising and falling metal of the old rollercoaster. Not long after that we started a slow walk out. On the way past, we spoke to him briefly. He’d warmed to us significantly since our first meeting and we chatted a little about the situation. He laughed with us. We complimented his job; basically sitting in a car, chilling, watching movies on his phone, providing ‘security’ for an empty theme park that was falling apart.

Funny that an abandoned place needs security at all. One of those base contradictions. Let people do what people are going to do. If they’re going to explore an abandoned theme park, let them. They only want to demolish it for flats anyway. Surprise. So, what difference does it make? Let fools explore if they want and if during the course of that exploration they hurt themselves, so be it. Monkeys have been getting themselves into capers like this since the dawn of time. It’s a risk you accept on entry. Nature of the game.

We walked across the pot marked car park, the white plywood spires behind us—more like an imitation Disney Land than an imitation castle—and on the way to the car we knew our last adventure was past.

Ahead of us nothing but parallel lines and miles and miles of road, nothing but money calculations, job searches and unanswered application forms. The sheer soul crushing boredom of it all. It can be hard just to keep above the rising ocean of general anxiety and malaise. It’s hard to shake the sense that everything is mediocre and banal.

We’d just travelled back from a place where we had sat on a cliff side watching a lighthouse while the pulses of other lighthouses lit on islands  in the distance, where we’d gone on a drive and crossed under the arches of five separate rainbows. Rainbows that looked like bridges between mountains.  Waterfalls gurgled down hillsides and off mountains on the dry days and rushed on rainy ones and if you were there long enough you could see the living land change in front of you.

I travel around and write about it. When I'm not travelling around, I write about whatever seems meaningful to me at the time; these are usually meditations on current events, finding ways to survive the crushing existential grind of modern civilisation or vaguely philosophical musings.
View all posts by Luke Smith →
This entry was posted in the highlands and tagged camelot, castle, diary, Roadtrip, theme park, urban explore, urbex. Bookmark the permalink.